I have now met one of The Beatles.  The other day I finally got to meet Sir Paul McCartney, the most successful popular-music composer and recording artist ever, at the Times Square Virgin Megastore in NYC. 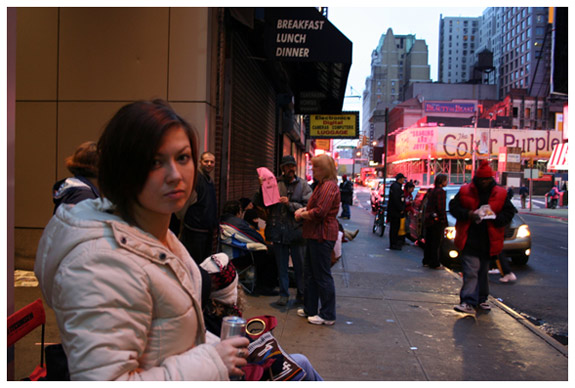 It took some effort to get the opportunity.  Steph and I arrived 22 hours before he was scheduled to arrive.  We had expected maybe 30 people or so to already be standing in line, but instead found a line that wrapped all the way around the corner and down W 46th St.  A man towards the front of the line started passing down a list for people to sign, and we found that we were the 114th and 115th persons in line.

The wait was long and miserable at times.  It was raining and pretty cold, and I was under-dressed.  Everybody else in the line had brought sleeping bags, blankets, camp chairs and even tents…. we however, we had one thin blanket to share, two backpacks to rest our heads on, and the hard pavement.  About 40 of us huddled into the entranceway to the building we were next to, which shielded us from the rain.  Slowly people started to fall asleep, including myself, until around 1am when a security guard came outside and told everybody to leave or get arrested.  This caused a lot of people to get pretty upset, and all of a sudden people were arguing over their spot in line, and nobody was really sure where to reposition themselves.  Virgin did absolutely no organization for the line outside so it was a bit chaotic.  Fortunately that guy from the front of the line took charge and tried to keep everybody in line.  We came to call him “The Leader”. 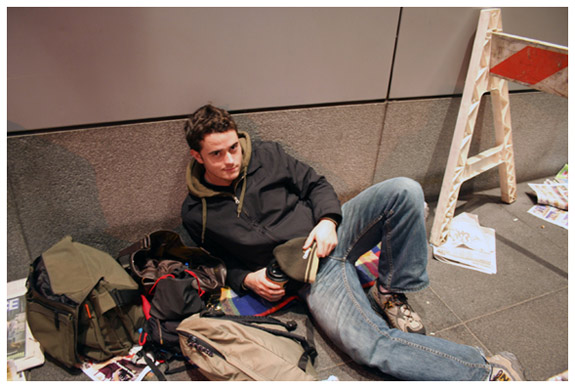 The night went on that way for a while.  Every hour or so we’d all have to wake up and move so a truck could get through or because the line had to move back.  But we got through it with the help of some pizza, McDonald’s, Dr. Pepper, and Killians.

Around 8am Virgin opened their doors and we made our way in to buy a copy of Ecce Cor Meum and his new DVD The Space Within Us for him to sign, and received a wrist band to guarantee we’d get to meet him.  From there we were brought down two levels, where we formed a new line.  This one was even worse.

Overnight we had met a few people that annoyed the hell out of us.  One was a currently unemployed activist who bragged about how she was “saving the world” and was planning on getting Paul to help her out.  We couldn’t get away from her.  She was definitely one of the most annoying humans I’ve ever encountered.  I’ll call her Greta.  The other guy was in front of us and kept holding up one of the “I love Paul” signs that had been passed out with an “a” written at the end to form “Paula”.  He did it because he wanted everyone to know that he’s “not gay”.  This ass kept on harassing everyone, lecturing them about credit cards and insulting people.  I wanted to turn around and knock him out a couple times, but I kept my cool.  I’ll call him Gregory.

As it got closer to 12 the press started to come in and set up their equipment, and then started interviewing the crowd.  I heard an employee say that over 500 people had lined up overnight, but somehow everybody was going to get a chance to meet him.  A lady from Reuters came up to Steph and asked her questions about Paul and what she thought about the divorce controversy.  The energy in the store started skyrocketing.  People were signing, screaming, crying…. it was nuts.

Then the whole crowd erupted and everybody turned towards the escalator as Paul started walking down.  He walked in front of the cameras and let the press take a couple million shots, and then sat down and began meeting people and giving his autograph.  At first the line was moving pretty fast, but I think he slowed it down so people could talk to him a little more.  Steph and I were sandwiched in between Greta and Gregory.  At first they were both annoying from behind, so all we had to do was look forward.  But then Greta started inching her way forward along side of us and eventually cut.  So I said “what happened to the line?” and then asked her to get back behind us.  She didn’t, so then I told her to.  Still didn’t, so on the verge of snapping, Steph calmed me down.   Then she ended up telling her off. 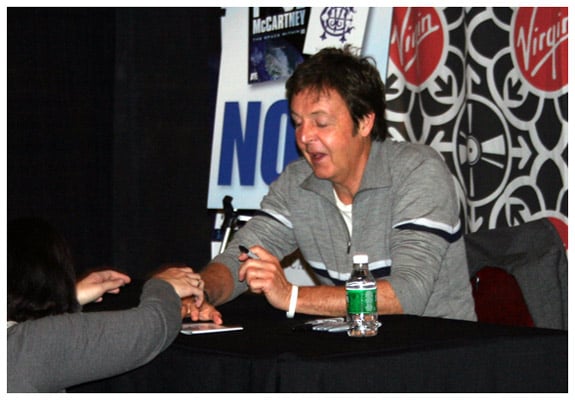 The line kept on moving, and as we got to the front we realized that the security guards were taking away peoples cameras before they went up to meet him.  So we came up with a plan  where I’d let a couple of people get ahead of me so I could get a picture of her with Paul, and then when she was done and got her camera back she could turn around and get a picture of me.  It didn’t work out that way, I managed to get a picture of her while she was up there (which Gregory ruined), but as soon as she was done they rushed her up the escalator and I was still one person away from going up.

I had been trying to think of what to say to Paul when I got up there.  I had a million questions to ask, but I think because of the security and the frustrations in the line, I pretty much just froze.  I shook his hand and thanked him for his music, and then asked him if he’d say hi to my mother, who’s been a Beatles/Paul McCartney fan all her life.  He said “Sure, where is she?”  So I replied “right here, in my pocket.”  “In your pocket?” he said.  “Yup on my cell phone.  Her name is Eileen.”  So he took my cell and said “Hello Eileen!  I love you!”.  I said a few more things to him, but I can’t remember what.  He was extremely friendly and didn’t rush me at all.  It was unreal to be talking face to face with one of the Beatles…. especially with the one I think is by far the most talented.  I shook hands with him one more time before I left, got my camera back and then went up the escalator to find Steph teary eyed and shaking because of what just happened.

I’ve been a Beatles fan my entire life.   I remember my mom playing the Beatles albums all the time in the car when I was a little kid, and her telling my brother and I some of the history behind the music.  Help! was always my favorite album when I was younger, and I loved the movie too.  As I got older it became more of my own interest, and not just what my parents listened to.  Over the past years I’ve become a fairly hardcore fan, as I’m sure all of my friends could tell you.   So to meet the guy, look him face to face, and personally thank him for the music that’s been so important to me in my life, and to know that this was one of the guys that conquered America on the Ed Sullivan Show, changed music forever with albums like Sgt. Pepper’s Lonely Hearts Club Band, Revolver, and the White Album,  played the infamous rooftop concert at Abbey Road Studios, and touched the lives of more people across the world then I could ever even conceive, was an absolutely incredible moment in my life.   Even now just thinking about the opportunity I just had is mind blowing.  Some of the people in that line with me have been waiting since the 60’s to meet this guy.  All I had to do was wait a couple of years and then stand in line for a day.   I can’t tell you how lucky I feel right now. 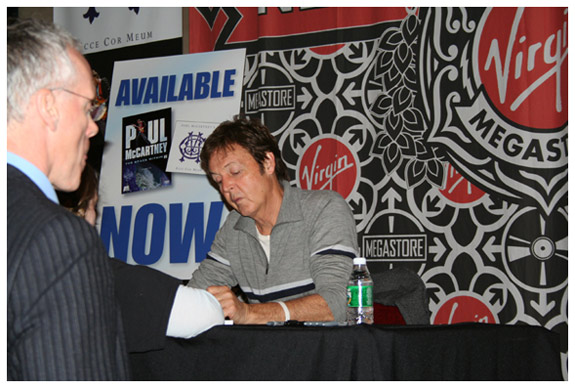 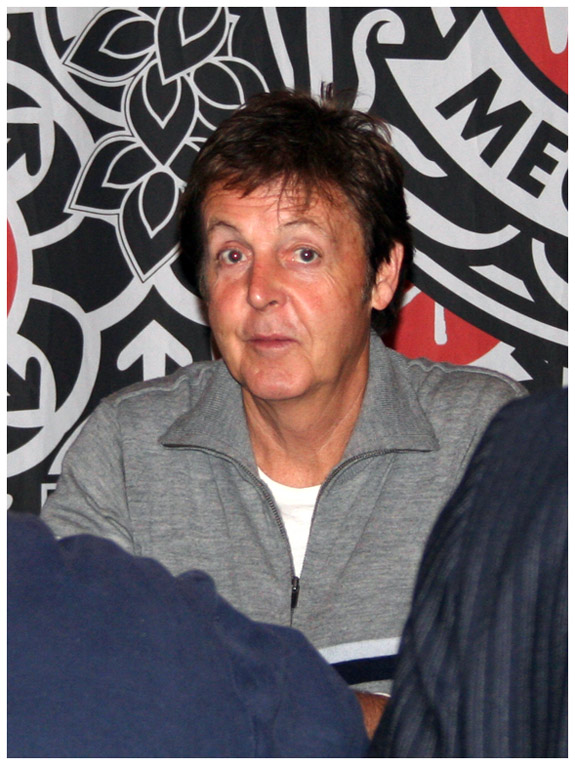 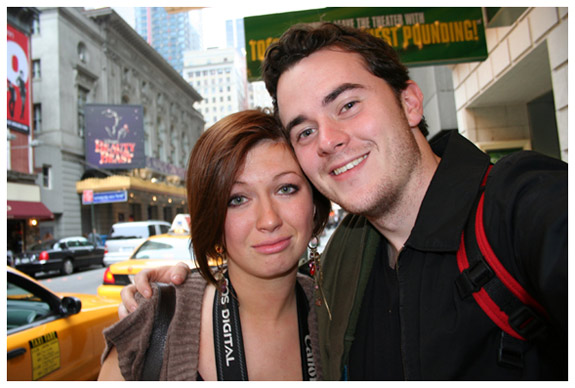 Culture, Concerts, beatles, A Day In The Life

Last night Steph and I went back into the city to attend the United States premier of Paul...

The Cliffs of Moher and The Burren

The bus driver for Troop 3 was nice enough to let me hitch a ride with them despite insurance...