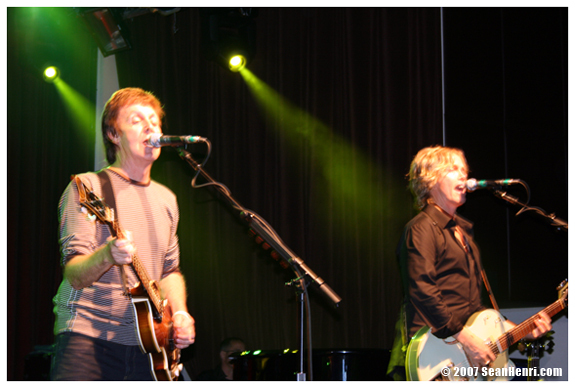 Let me go back a few weeks to explain this.  About a month ago I
found out that Paul McCartney would be doing some type of live
performance in NYC to promote his new album Memory Almost Full.  Any
large-scale world tour would be postponed to next year due to "personal
issues" (his divorce from Heather Mills).  So being a huge Beatles/Paul
McCartney fan, I did some intense research until I found out the
details of what would be going down.

I found out that the show was going to be a small-scale "secret"
show about two weeks ago and that I’d have to win tickets through a
radio station contest in order to go.  Only a few hundred contest
winners and invited guests would be given tickets.  So after looking
through the websites of nearly every FM radio station from the
country’s major cities, I finally found a contest where you could enter
a raffle to win tickets by correctly answering 20 questions about
Paul.  I didn’t win.  But my friend Steph did, and she offered to take
me.  Amazingly, my friend Bret won as well and offered to take my
brother Justin.  So now we had 3 people from CT’s smallest town attending a concert that thousands of people from around the world were trying to go to, and I was one of them.

More below the cut. 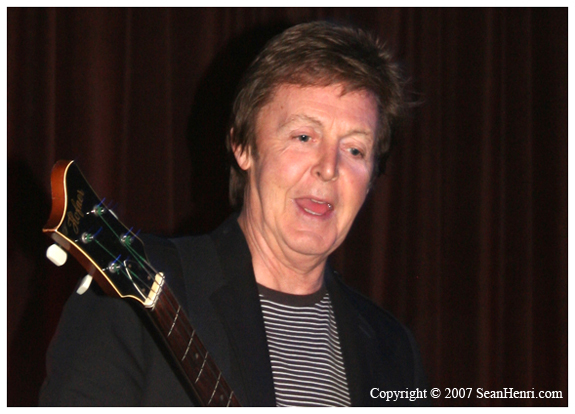 Earlier this week a radio station sold a pair of tickets
to this show for $9,100 on ebay.  Just shows you how rare of an
opportunity this show would be.  I’d have to go back half a century to
the days of The Cavern Club to find another chance like this.

After picking up our wrist bands from the Gansevoort Hotel we walked a few blocks north to the Highline Ballroom
to wait in line.  The line stretched the length of nearly the entire
block, and was a mix of both young and old fans.  People were carrying
albums and other memorabilia hoping they’d get a chance to have it
signed.  Towards the back of the line there was a young boy dressed up
like Paul from the Sgt. Pepper’s cover. 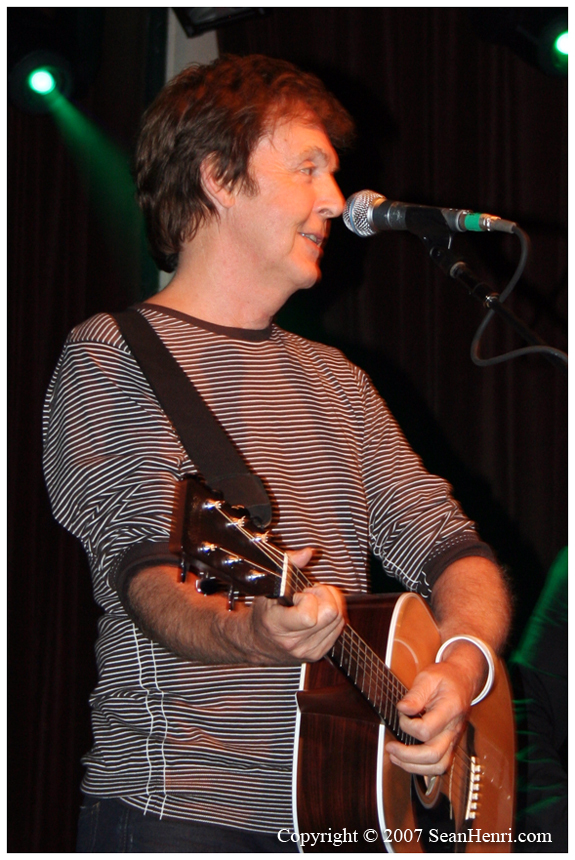 I was a bit worried that they’d take away my camera when I got to
the door, but as it turned out, the security guards didn’t seem to mind
at all.  I probably could have carried in a camcorder if I wanted to.

Seeing the actual size of the place was shocking.  I knew it would
be small, but it was amazing to see how close we were actually gonna
be.  This place was half the size of my high school auditorium.

There was an area off to the side up in the balcony that was roped
off for celebrities.  I spotted Whoopi Goldberg and Elijah Wood.  I
guess Kate Moss, Adian Quinn, James McCartney, and Steve Buscemi were all there as well.

Paul came out, said a few words to the crowd and then started the
show with "Drive My Car".  The rest of the show consisted of lots of
Beatles songs including "Hey Jude", "The Long and Winding Road",
"Blackbird" and "I’ll Follow the Sun" as well as some of his solo stuff
including "C Moon" and "Calico Skies".

Paul’s keyboardist Wix Wickens was missing from the stage and they
had somebody else filling in for the show.  Paul said that Wix was in
London rehearsing for a performance for "Her Majesty, The Queen"

About halfway through the show he explained that he enjoyed playing
in New York because it’s played a very significant role in his life. He
said it was special to him that it was where he played the Ed Sullivan
Show in the 60’s, the place where Linda grew up, and the place that
John loved so much.  Before he played the
song "Here Today", he noted that while he originally wrote the song for
John, this time he wanted to dedicate it to his "fallen heroes" John,
George, and Linda (his first wife).  For me, this was the highlight of
the night.  The crowd became completely silent while he performed the
song and you could see how much the words meant to him as he sang it.
His voice was flawless.

Another interesting part of the show was when Paul asked everyone in
the crowd to nod their heads to the beat of the song "Nod Your Head"
for a music video he was putting together.  He said that the crowd at
his last gig in London seemed to have some difficulty with keeping a
beat, so he trained us a bit and hoped that we’d do a little better.

He played several other songs of his new album including "House of
Wax", "That Was Me" and "Dance Tonight".  These songs were great played
live!  They fit in perfectly with the rest of the set.  "House of Wax"
was my favorite out of the bunch.  That songs been growing steadily on
me over the past month.  It could be a big hit for him at future
shows.  There was a funny moment when during one new song Rusty, Paul’s
guitarist, accidentally started playing the chorus again one time too
many and screwed Paul up.  They played it off well though, just quickly
laughing and then moving on.

He was joking around a lot in between sets, engaging in "meaningless
conversation" as he put it, and often reflecting back to his days as a
Beatle.  Before playing "I’ll Follow the Sun" he mentioned how he
remembers writing the song at his home back in Liverpool, looking out
the window and wondering if he’d ever become a star.  There were
several back and forth exchanges of "your the man" and "no, you the
man" between Paul and few different people in the audience.  At one
point the crowd broke out with an impromptu singing of "Happy Birthday"
that seemed to catch Paul a bit off guard but also please him.

He finished the show with "Hey Jude" and had the crowd sing along
for him, splitting up the singing between just the men and then just
the women.   He came back out for an encore of  "Let It Be", "Lady
Madonna" and  "I Saw Her Standing There".

This show was absolutely amazing.  It was without a doubt
the best concert I’ve ever seen, and I’m still having trouble believing
I was lucky enough to actually be there.  I’ve really had an amazing year with
this kinda stuff.

Following the show, I was walking back to the parking garage to pick
up my car when I noticed that Paul’s photographer, Bill Bernstein, was
standing right in front of me.  Steph took the initiative to go up and
talk to him.  We all ended up having a nice chat about the show, Paul’s
first wife Linda, how we won the contest for the tickets, and about his job as Paul’s
photographer.  He was a really nice guy and it was great to get a
chance to talk to him.

I’ll put these pics and a few more in an album tomorrow in the Pictures section.  Sorry for the delay.  If you would like prints of any of these pictures please send me an email at seanp284@gmail.com.

Here’s the set list as I remember it: (not necessarily in the correct order)

Encore:
Let It Be
Lady Madonna
I Saw Her Standing There

Here’s video of the show from Good Morning America.

And here’s a great interview with Paul about the show I was at.

There is a video at PaulMcCartney.com that features my friend Steph at the end of the show.  I can be spotted in the background with my brother Justin and my friend Bret.

People Magazine: "Paul McCartney Plays Intimate Show in NYC" (My brother and I gave the reporter the bulk of the song names.)

Here’s some video of the show from PM.com.  Look closely and you might spot me: 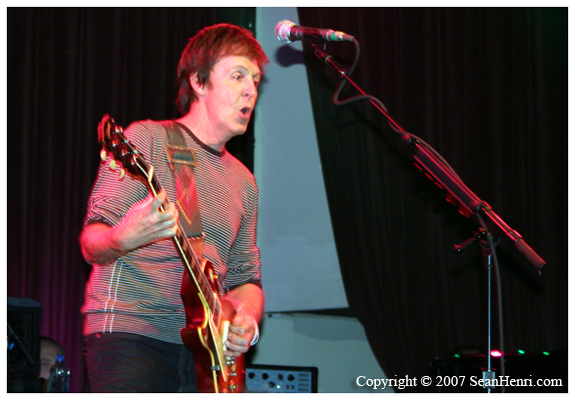 Thanks to Seth Kallen for the "Hey Jude" and "Let It Be" videos!

Culture, Concerts, Contests, A Day In The Life

Paul McCartney.. Billy Joel.. an all-access pass and a front row seat. It all started when I saw...

I have now met one of The Beatles.  The other day I finally got to meet Sir Paul McCartney, the...

Video from the NYC McCartney Show

I came across some really good footage from the Paul McCartney show I attended this past June. ...