Who is Radio Man?

Radio Man, or “Radio” is no bum. His real name is Craig Castaldo and he’s a former homeless man from NYC who earned his name by having a large radio hanging from his neck.  While meeting him for the first time you might suspect he doesn’t have much going on, he’s actually  appeared in over 30 major motion pictures, including The Departed, Mr. Deeds, Elf, and Godzilla.

I first encountered Radio while I was waiting in line to meet Paul McCartney last November, sitting on the city street overnight.  At first I wrongly assumed that he was just trying to find a place to sleep, and not waiting to meet Paul, but then the next day we actually saw him inside the building waiting in line with the rest of us.  I learned his name when a couple of guys walked by and shouted “Hey Radio!”  He sat there all night rewinding his tape and singing along to commercial jingles that he liked.

Fast forward to yesterday – I was in New Haven picking up my costume for Indiana Jones 4, when Radio Man bursts into the door and runs right past security.  At first everyone was kind of startled, but once they realized who he was they brought him over, gave him a shave and a costume, and let him be an extra.

Following the last shoot of the day, Radioman walked towards Steven Spielberg to personally thank him for allowing him be in the movie.  Spielberg let him come right up to him, shook his hand and said  “No problem!  Great to see you again”.  Again?  They know each other?  So I looked him up online.  There are pictures of Radioman kissing Jessica Simpson, a story about him in the New York Times, and even a profile on IMDB.   His website features pictures of himself alongside people like Tom Cruise, Pierce Brosnan, and Johnny Depp.

Radio Man used to be homeless and on hard times, but now earns a living from being an extra in movies, and by selling the autographs of the celebrities he meets.  He’s become well known among New York celebrities, and is a source of information for paparazzi because he’s “in the know” when it comes to celebrity appearances and movie filming. He has hopes of becoming a big actor himself one day. 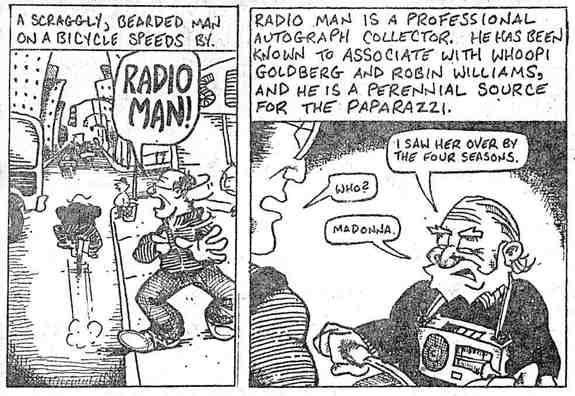 From the New York Times.

06/27/21 UPDATE: I wrote this post a long time ago (in my 20’s) and revisiting it in my late thirties, I’m disappointed in some of my original descriptions. Early this morning I received the message below from an anonymous reader. I’m thankful for their note, as it prompted me to revisit this post.

Sean, radio man was once a very successful businessman. Owning one of the biggest newsstands in NYC. He is not a bum and when I knew him in the 90’s the teamsters would pick radio up at the home of his family and bring him into NYC to visit movies shooting in the city. He’s been in more than 100 productions. Do better research and try not calling virtual strangers bums, you jerk.

His story is the perfect example of how we should never assume we know someone’s story and life experiences. In the moment, and in my recounting, I was wrong to judge by appearance alone.

Yesterday morning marked my graduation from SCSU.  The rain stopped just in time for the ceremony...

Back home from Ireland

I’m back home from Ireland.  I’ve posted all of my pictures as well as a few that I swiped from...

Paul McCartney released his and Linda’s 1971 album “RAM” today, and to promote it  came up with...