Cleaning up the banks of the Naugatuck

The cleanup effort along the Naugatuck River in Derby went fantastic.  Dozens of volunteers including every-day citizens, city officials, and UI workers came out to lend a hand.  The sad thing is that while we made a major dent in removing the piles of trash, it would probably take the same amount of volunteers another ten weekends to remove all the garbage that remains. 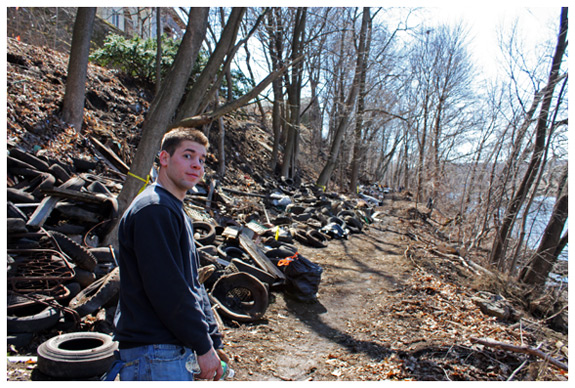 My friend Ricky and I were quoted in the New Haven Register:

“Derby resident Sean Henri not only walks the greenway but kayaks the
Naugatuck and he has seen firsthand the debris that litters what could
be a pretty hillside. What he saw from his kayak is what prompted Henri
to volunteer Saturday.

“I am shocked. I knew it was bad, but I didn’t know it was this bad,” he said, looking around.

His friend, Ansonia resident Ricky Donnelly, said he hopes residents of houses above the river keep the woods clean from now on.

“I don’t know why people would want that in your backyard. It’s an eyesore,” he said.”

Video can be found here.

Cleanup of the Naugatuck River Scheduled in Derby

The second annual volunteer effort to cleanup the banks of the Naugatuck River in Derby has been...

The Avett Bros in NYC

Kelly and I went to see the Avett Brothers last Wednesday night at Terminal 5 in NYC. Amazing,...

A hostel in Galway

I’m in Ireland, by myself, and I want to see something new.  So I take a bus up to Galway, a city...