Just went on the trip of a lifetime – a ten day long tour of Ireland with the love of my life…  and came back engaged!

It was on the second to last full day of our trip when I proposed.  We had taken a boat out Inishmore, one of the Aran Islands off the coast of Galway, and biked our way out to the "Man of Aran Cottage" where we stayed for the night. Man of Aran is modeled after the old fashioned thatched roof cottages that were once common in Ireland, but was actually built in the 1930's for the documentary "Man of Aran".

Arriving at the cottage via bike

Our view while we enjoyed some wine in the backyard 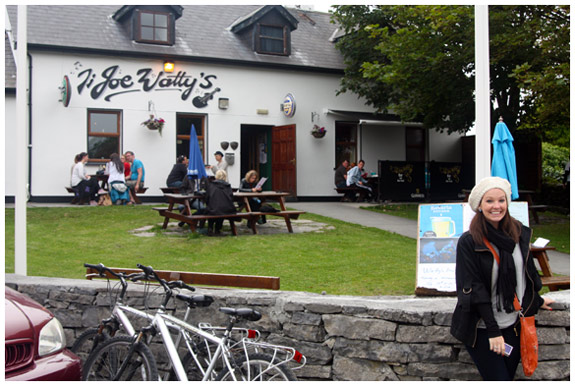 Walking up the trail to Dun Aengus, an ancient fort built around 900BC alongside an extremely high cliff… and where I proposed.

Kelly lovingly scaring the sh*t out of me

Fortunately she stepped far away enough from cliff where I could feel safe enough to get down on one knee and ask her to marry me.. and SHE SAID YES!!!

After we got back I did some reading about the place and learned that the name Dun Aengus translates to Fort of Aengus.  Aeungus was the pre-Christian god of love, youth and poetic inspiration.  The myth says he had four birds flying about his head, which supposedly is where the xxxx's symbolizing kisses at the end of love letters come from. Cool!

BlogSherpa, A Day In The Life

A few friends and I spent the weekend in Bar Harbor and Acadia National Park in Maine. I was blown...