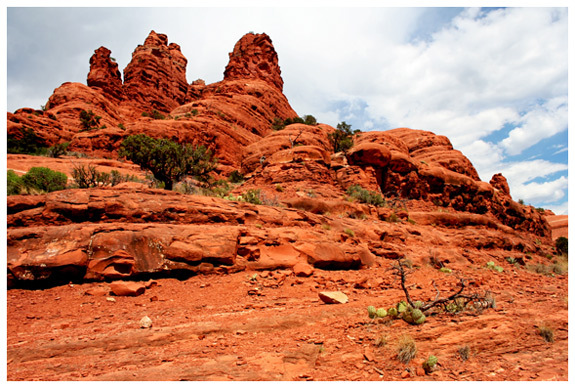 The flight here was terrible.  My "window seat" lacked a window, the plane had no pillows or blankets, it felt like there was an hours worth of turbulence while over Oklahoma and Texas, and the woman next to me was praying the rosary like it was Armageddon.

It was worth it.  Friday night was kept low key, partly due to the fact that it was almost 2 AM by the time I arrived.  My friend and I grabbed some fast food from Jack In The Box (great stuff), had a quick chat, then called it quits for the night.

Saturday we started the day with some coffee and then took a 2 hour road trip up north towards Sedona.  The terrain changed fast – from flat desert and tall cacti to jagged red mountains in what felt like the matter of a half hour.  I drove most of the way because my friend wasn't too crazy about driving in the mountains. The views were amazing so the drive seemed to go by very quickly.

We pulled over at a rock formation to the south of Sedona called Bell Rock.  A lot of people go here looking for a Vortex – a place where people have reported feeling inspired by a beneficial source of energy.  Needless to say, I'm a bit skeptical about the existence of such a thing, but I wasn't there for that, I was there for the hiking.  We tried to make our way towards the top, but in 110 degree heat we couldn''t get very far so we had to turn back.

Once our attempt at hiking was over we made our way to downtown Sedona where we lunch and cooled off at a Mexican restaurant named Oaxaca.

From there we did a bit more driving, and then found ourselves hanging out along a river and watching people jump off cliffs at Slide Rock State Park, just to the north of Sedona in the Coconino National Forest.

To sum it up: it's been an amazing weekend so far. 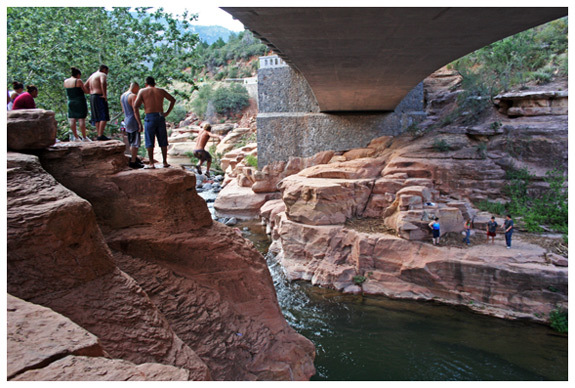 Our tour around the island in a rental car gave us a good glimpse of the volcano and the freedom to...

Late Tuesday my Dad and I decided to take a hike to the nearby village of Sainte Anne.  There...