One year ago I wrote about the possibility of having one’s online reputation ruined through the poor choices of another person with the same name.  I suggested that in order for people to prevent this, they should register a domain, set up a blog, and get proactive in controlling their online identity.

A few people, including my friend Mike, took that advice and registered a domain.  I’m sure he’s now glad he did because just the other night a person who had his same name, age, and lived in the same state was arrested on drug charges.

With his name broadcasted all over the news Mike quickly wrote a post on his blog titled “I DID NOT GET ARRESTED LAST NIGHT“.  If Mike didn’t take steps to control his online identity his reputation could have been permanently damaged.  But because he did, he was able to quickly clear things up via his blog and now if anyone were to Google his name they’d quickly find out the truth.

Moral of the story: start blogging or people may erroneously believe you’re a drug dealer. 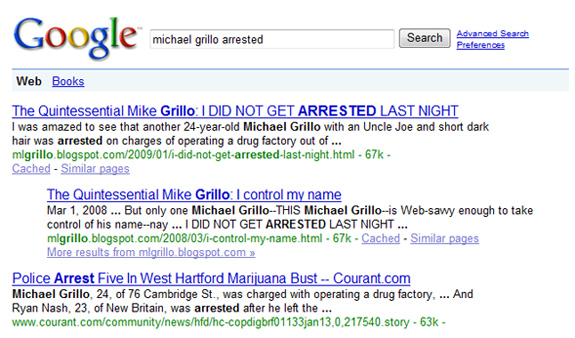 Our tour around the island in a rental car gave us a good glimpse of the volcano and the freedom to...

With a long weekend in front of me, I was determined to go somewhere new.  After taking in all the...

Driving from Yellowstone to Connecticut in a rental truck

Earlier this month, I had the opportunity to travel to Yellowstone National Park for a work. The...